We were the lead institution that constructed the Ring Imaging Cherenkov Detector (RICH) for the CLEO III upgrade that is now an integral part of CLEO-c More information is available on various aspects of this project including: a full description of design, operation and performance of the device in the CLEO RICH NIM article, test beam results from Fermilab , the “single ring prototype,” the RICH electronics design, chamber construction, and the gas system designed at Minnesota. Rich notes on other topics explain more details of the entire system (in postscript). 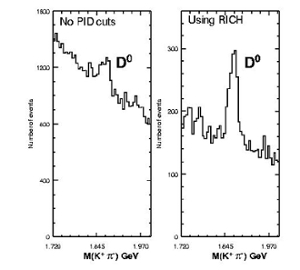 CLEO III Ring Imaging Cherenkov Detector (RICH) determines the identity of charged hadrons by measuring the angle of emission of Cherenkov light, a kind of shock-wave caused by particles moving faster than the speed of light in material. The detector was constructed at Syracuse Univ. and subsequently moved to Wilson Laboratory at Cornell University.

Emission of light by charged particles moving faster than the speed of light was discovered by Pavel Cherenkov(1) and explained theoretically by Frank and Tamm (2). A recent theoretical review is provided by Tom Ypsilantis and Jacque Seguinot (3). They also discuss techniques of constructing and using Ring Imaging detectors to identify particles.
The basic idea is that light is emitted in a cone around the direction of the charged particle. The emission angle of the light is given by the formula cos(theta)=1/(n*beta), where n is the index of refraction and beta is the particles velocity as a fraction of the speed of light in vacuum, c. If the momentum of the particle is measured independent and the angle of Cherenkov light emission also reconstructed, then it is possible to derive the mass of the particle. Thus Cherenkov detectors are mostly used to identify charged particles.

A Ring Imaging Cherenkov Detector consists of a radiator, an expansion volume, which allows the photons to separate and a photon detector. Often the light is focused with a spherical mirror to reduce the error from the uncertainty in the emission point of the light.

More information is available in reference (3).

The figure shows a sketch of the CLEO III RICH structure. The radiator is LiF, 1 cm thick, followed by a 15.7 cm expansion volume and photon detector consisting of a wire chamber filled with a mixture of TEA and CH4 gas. TEA is photosensitive. The resulting photoelectrons are multiplied by the HV on the wires and the resulting signals are sensed by a rectangular array of pads coupled with highly sensitive electronics.