The LHCb (Large Hadron Collider beauty) experiment is one of several new experiments constructed at CERN, which is due to restart in 2009. (For more information on the terminology used here, please refer to the “Terminology” link on the left. )
The LHCb experiment will explore the decays of beauty (B) and charm (D) hadrons. These particles have been explored before in several other experiments, including CLEO, BaBar and Belle. The Syracuse University group is a founding member of CLEO and made many significant first measurements on that accelerator. BaBar and Belle followed CLEO and vastly improved the many measurements capable of being produced. We are now working on LHCb which will again be a vast improvement over our past experiments. Interestingly, Syracuse University is currently the only US institution working on the experiment. 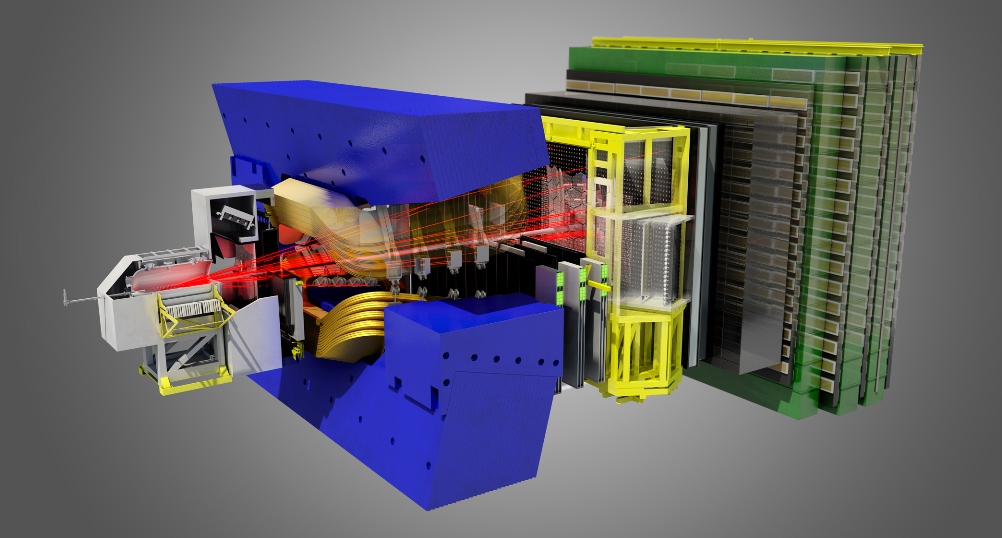 B mesons are special because they contain the heavy b quark. B’s weigh about five times the mass of a proton while D mesons are only about two times the proton mass. These particles are inherently unstable and decay radioactively in about 1 pico second (1×10-12 seconds), which in our view is a relatively long lifetime. When these mesons decay they are sensitive to the effects of other particles that are hundreds of times as heavy, and these other particles govern the decay rates into particular final states of different lighter particles. Not only are the decay rates effected but so are other, more complicated properties of the interaction. Thus we can see the presence and the effects of other, much heavier particles that have not even been discovered yet.

The LHC has been built to discover these new particles directly that most physicists believe to exist. One of these is the Higgs boson, that you can read about here. This boson is not one of the particles we are sensitive to at the LHCb experiment if it is the simple neutral Higgs. However, if there is a more complicated structure with charged Higgs particles, then the LHCb detectors should observe their effects. The LHCb experiment is sensitive to the kind of new particles that should be produced at the LHC and will be in important tool in deciding what the properties of any new particles found directly in other experiments are.
Now…let us tell you about matter/anti-matter asymmetries. One great question is how the universe evolved from an initial state that had an equal amount of matter and anti-matter to its present state, which is predominately matter. Since matter and anti-matter violently annihilate, some asymmetry between particles and their respective antiparticles must have emerged early in the universe’s evolution. Physicists call this “CP” violation for various reasons that we need not discuss here.

The BaBar and Belle experiments established that CP is indeed violated in decays of B mesons, but we also came to learn that the amount of CP violation was several orders of magnitude too small to explain the survival of the universe (one order of magnitude is a factor of 10 hence “10” is one order of magnitude smaller then “100,” etc). LHCb will have the sensitivity to explore other types of CP violation in B and D meson decays and perhaps ferret out some other sources. As important as this question is, however, the main physics reason for the LHCb experimentation is to test the effect on B.

So, if we’re talking about miniscule subatomic particles such as quarks, which we surely cannot see, and something seemingly intangible such as antimatter, why is this an important foundation for such large and detailed scientific experiments? Because our current understanding of the universe is far from complete!