Today I’m going to describe the last, but definitely not least LHCb subdetector, the muon subsystem, which unsurprisingly from the name, is designed to detect muons. Just in case you’ve all forgotten what the LHCb detector looks like, I’ve included a schematic below. The muon subsystem is the rightmost one, with alternating layers of light and dark green. 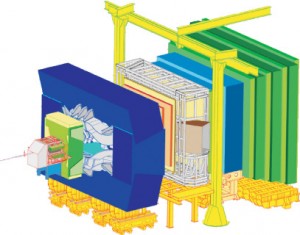 So why is a completely separate subsystem required to detect muons on top of the previously described vertex location, tracking, particle identification and calorimeter subsystems?

It all comes down to how muons interact with matter. In my last post, I said that the goal of the LHCb calorimeter subsystem is to stop particles in the detector and measure how much energy is produced through interactions with the detector material. However, I left out the important fact that different particles interact differently with detector material. In particular, muons pass through the calorimeters almost without any energy loss. Flip has a very nice explanation about why in this post, where he compares electron interactions to muon interactions… which he hopefully won’t mind if I borrow…

Electrons are light, so let’s imagine that they’re ping pong balls. On the other hand, muons are heavy, so let’s imagine them as bowling balls. As you probably know, the LHC detectors are big and full of stuff… by that I mean atoms, which in turn are made up of a nucleus and a cloud of electrons. We can thus imagine a sea of ping pong balls (kind of like an IKEA ball pit). When electrons hit this ball pit, they end up distributing all of their energy into the other balls. Muons on the other hand, are so massive that they just barrel straight through the ball pit to reach the other side. 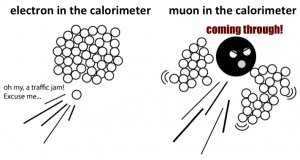 Why go to all this effort just to detect muons?

Apart from muons being the only particle you can make farm jokes about, the fact that muons are the only known particles which the calorimeters don’t stop is quite useful. It means that if any signals are seen in a detector that is located behind the calorimeters, they must originate from a muon. This makes searching for decays involving muons much simpler than searching for decays involving other particles, such as electrons. An example of such a decay is the rare decay which may reveal new physics, as discussed previous by both
Ken and Flip.

So how does LHCb detect muons?

The muon subsystem comprises five rectangular ‘stations’, gradually increasing in size and covering a combined area of 435 square metres. Each station contains chambers filled with a combination of three gases – carbon dioxide, argon, and tetrafluoromethane. The passing muons react with this mixture, and wire electrodes detect the results. In total, the muon subsystem contains around 1,400 chambers and some 2.5 million wires.

Here is a nice photo taken between two of the stations… 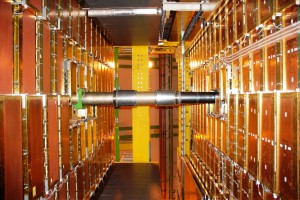 So now you know all about the LHCb detector, you should be able to understand the following event display of a event. If not, don’t fear, because there’s a very good explanation
here.

And that ends my series of posts describing the LHCb detector… I hope you all enjoyed reading them as much as I enjoyed writing them.