I’m not ashamed to admit that I spend a fair bit of time monitoring what the LHC is doing. Luckily there is a very good set of web pages that allow me to do this, the first of which Brian discusses in this post.

Below I’ve got stills of Page 1 and Page 3 when the beam is in Adjust and Stable modes.

It’s a little hard to see, but I’ve highlighted particular sections of each page. First on Page 1 there’s a small entry titled Movable Devices Allowed In, while on Page 3 there’s a special entry for the LHCb VELO Position.

These two small entries in the LHC status pages are probably all that people outside LHCb know about the VELO, and even then the first entry isn’t an obvious reference.

So what is the VELO? And why does it move?

The VErtex LOcator is the part of the LHCb detector closest to the collisions at the LHC. As I mentioned in my previous post, its job is to measure particle tracks to precisely separate primary and secondary vertices and that this is important to identify B mesons and their decay products.

This is possible through the use of 42 silicon modules which during physics data taking are positioned as close as 5mm from the interaction point.

While it is important for the sensors to be close to the beam during physics data taking for optimal precision; at these small distances, there is a high probability that the modules will sustain damage due to radiation from the high energy proton beam.

To prevent damage, the silicon modules are mounted on custom made bellows, which allow the VELO to retract to the safer distance of 30mm from the beam during periods of beam instability.

Below is a schematic of the silicon modules from the side and from the front, in both open and closed positions, followed by photo of the actual modules during the assembly process.

The VELO is a very impressive feat of physics and engineering. It is not an easy task to design a set of silicon chips and associated services to operate so close to a high energy proton beam and its associated electromagnetic effects. And it works! Beautifully, as can be seen from this view of one of the first reconstructed B mesons… 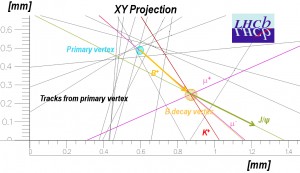 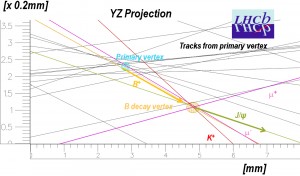 I like to think it is because of Syracuse’s involvement in the subdetector, but Syracuse is just a spoke in the collaboration…