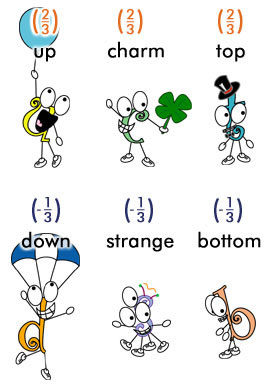 Quarks are a type of particle that constitute matter. Look around you…all of the matter that you see is made up of protons and neutrons, and these particles are composed of quarks.There are three pairs (or families) of quarks for a total of six. They are: up/down, charm/strange, top/bottom. Each of these quarks has a corresponding anti-quark which is equal in mass yet opposite in all other aspects. Antiquarks are denoted by a bar over the quark symbol. For example: u, pronounced “u-bar,” and d, pronounced “d-bar”.

Be careful! Because the names of the quark pairs seem to be opposites of each other (e.g. up and down), do not confuse these as a quark-antiquark pair. The antiquark of the up, is u, not down, and similarly for all the quarks.

A few facts about quarks and matter:

Impressive, right? But think about this for a moment. Look around you at your computer screen, the desk your arms are resting on, the chair and everything else in the room. Would you say all of this is matter or antimatter? Yes! Matter, of course. Do you see any antimatter around you? Not likely unless you happen to be working in the target zone of a positron generator at a large particle physics laboratory somewhere.

The answer is: we don’t know. This question is the very heart of the mystery that particle scientists have been trying to solve! (In other words, this is what keeps a particle scientist up at night!) You may have had the following flash through your mind, “but I thought scientists knew everything.” Of course not, if they new everything, they would not have to go to work in the morning. This is exciting news to you, because it means you have a future career in particle physics if you so desire, since there are so many unanswered questions about the universe.