A blog post from Quantum Diaries by Anna Phan, published on Sunday, May 8th, 2011

Last post I discussed how we reconstruct tracks in LHCb. The next logical step is to talk about how we identify what sort of particle left which track. Continuing with my analogy about animal tracking, animals leave very distinctive tracks related to their paw prints and how they move. You can basically tell what animal left a track by examining it carefully… 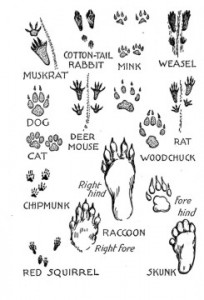 The above image was taken from this webpage.

Unfortunately is is not possible with particle tracks. Only given the parameters of a reconstructed track, there is no way to determine what type of particle left that track. More information is required and that is where the RICH1 and RICH2 detectors come in.

RICH detectors work by measuring emissions of Cherenkov radiation. A charged particle traveling faster than the local speed of light in a medium emits Cherenkov radiation in the form of light, in a cone at an angle which depends on the speed of the particle. The RICH detectors focus the cone of Cherenkov light into a ring using mirrors onto an array of detectors. The radius of this ring provides information about the particle’s speed. Here are a few of the rings seen in RICH2 from an early LHC event. 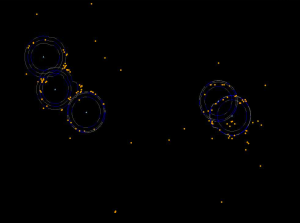 Here is a schematic of the RICH1. Particles will enter the detector from the VELO on the left, then travel through the Cherenkov media, producing Cherenkov light which are reflected by the mirrors into the photon detectors. RICH2 is fairly similar. 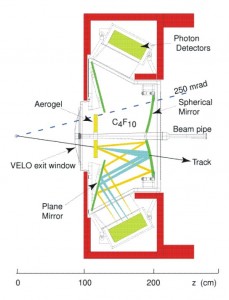 The two RICH detectors are responsible for identifying a range of different particles that result from the decay of B mesons. Particle identification is crucial to reduce background in selected final states. For example, in the plots below, we are searching for the decay of a meson into two mesons. On the left, you can see that without the RICH it would be very hard to separate the signal, shown in red, from the backgrounds, since we would have no way of accurately differentiating mesons from mesons and mesons. We would also have problems differentiating between mesons and mesons. On the right, using the RICH detectors, you can see that the signal is much much cleaner. They are very nice, useful detectors!