It is well known that when matter and its counterpart, antimatter, collide with each other they annihilate into pure energy. Therefore, when applying this well known phenomena to the conditions that existed immediately following the Big Bang: all matter should have been immediately annihilated by antimatter. However, a small fraction of matter survived the Big Bang and fortunately for us, it now forms the Universe in which we live. This observation and application of knowledge has left physicists with a perplexing mystery that they are striving to solve:what happened to all of the missing antimatter?

When you think of antimatter, your thoughts might be immediately drawn to the realm of science fiction, and you may be quite skeptical of its existence. After all, seeing is believing and have you ever seen antimatter? Not likely…and you wouldn’t even know if an object is made of antimatter unless it came into contact with its matter counterpart resulting in complete annihilation, which would leave only pure energy behind. However, particle scientists have learned how to create antimatter under laboratory conditions. They are able to do this if enough energy or a high enough temperature is achieved. The Large Hadron Collider (LHC) located at CERN can be used as an antimatter factory. The LHC is at the forefront of particle physics research because it will be able to accelerate particles of matter and antimatter towards each other and then smash them together in order to replicate the conditions of Universe when it was only one hundredth of a billionth of a second old (0.00000000001 seconds)! 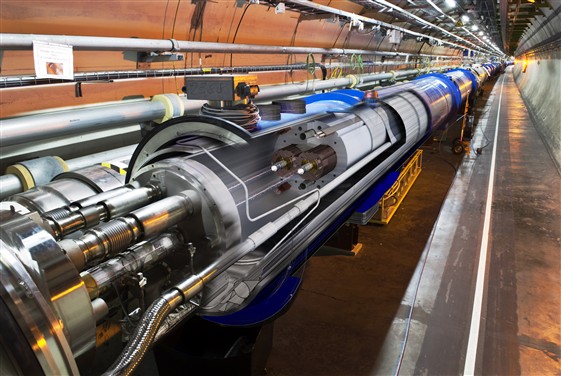 Its a Beautiful Thing…

The LHC stands out from other particle accelerators in that it will accelerate particles to the highest energy ever achieved under laboratory conditions. The LHCb detector (located on the LHC accelerator) will register the results of collisions between particles in order to replicate the first fraction of a second in the life of the Universe. The “b” in LHCb stand for b quark. The LHCb will record billions upon billions of collisions between pairs of the b-b every year in order to “recreate” conditions that occurred 13.7 billion years ago, when beauty and anti-beauty quarks were produced in pairs. In doing so, scientists hope to detect asymmetry in order to help explain why it is that nature prefers matter over antimatter.

The LHCb detectors are massive machines that perform complicated tasks. Even though they are so grand in scale, they are highly precise instruments designed with the latest technological advances that science currently has to offer. The huge LHCb detector is made up of several different components with each part measuring a different aspect of the particle collisions taking place. These different components measure trajectory (direction of travel), the momentum and energy of each particle along with its identity.