In 2003, CLEO switched operation from its primary beauty quark physics to running near the threshold for production for charm mesons. The figure above shows a scan of e+e- collision energy, where at each energy the experiment measures the ratio of production cross-sections for hadrons versus pairs of muons. Several prominent features are seen:

CLEO-c took data in this energy region. In addition to exploring the spectrum of charmonium states, CLEO-c took data on the peak of the higher mass charmonium resonances to produce very large samples of charm mesons near threshold. Much of the data collected was at the ψ(3770), and this resonance decays to predominantly to a pair of charm mesons. When this occurs, there is insufficient energy to produce any other hadrons, so the event is very “clean”. There is a D and a D (both of which decay), and nothing else. An event display showing the side view of an e+e- collision that produced a DD pair is shown below. The six curved lines shown are the reconstructed trajectories of 6 particles produced in the decay of the D and D meson. 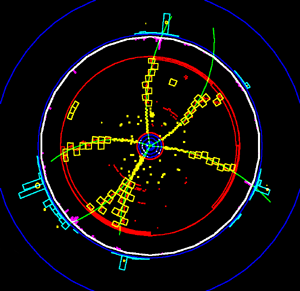 This allowed some world-class measurements to be made, including

You can find more information on CLEO-c public results at this page.