The figure above shows a scan of the e+ e- energy in the region from 9.44 GeV to 10.62 GeV. Four peaks are observed, corresponding to the formation of four Upsilon resonances. These states are the first 4 radial excitations of the bound state of a beauty-antibeauty (bb) quark pair. These states are in some ways analogous to the bound states of positronium, except for the Upsilon resonance, it is not the electromagnetic force that binds the constituents, but rather the strong force. Link

The masses of the first three Upsilon resonances (Y(1S), Y(2S), and Y(3S)) are less than the sum of the mass of a B and B meson (5.279 GeV each), and therefore, they cannot decay to B mesons. Rather they can produce light hadrons (or lepton pairs). The Y(2S) and Y(3S) can also undergo various transitions, as shown in the figure below. Link 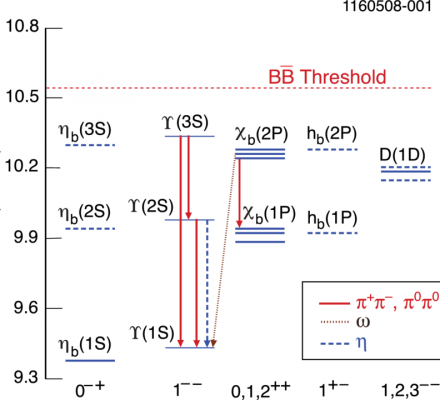 The study of these transitions has allowed for the discovery of other bb bound states with different quantum numbers than the Y resonances. The study of the the transitions provides critical data for understanding the theory of the strong force, Quantum Chromodyamics, or QCD. Link

The Y(4S) resonance, on the other hand, at a mass of about 10.58 GeV has sufficient mass to break apart and produce a pair of B mesons. Since the mass of the two B mesons is about 10.56 GeV, this means that (1) no other particles are produced, and (2) the B mesons are produced with almost zero kinetic energy. Because no other particles are produced when the Y(4S) decays to a BB meson pair. Thus, taking data “at the Y(4S)” allows one to produce a large sample of B mesons with which to study their decays. Link

The study of B meson decays was being understood to be a doorway to discover physics beyond the standard model. Most notably, it was recognized that new particles could contribute to B meson decay processes that involve virtual quantum loops. The participation of new, high mass particles in virtual quantum loops is governed by the uncertainty principle, rather than energy conservation. These new particles — if present in the B meson decays — could result in significantly large decay rates in processes that proceed through such loop diagrams. CLEO made numerous key discoveries and measurements with B mesons, including some of the earliest measurements of the CKM matrix elements Vub and Vcb, and the first observation of the flavor-changing neutral current b→sγ. Link

A second key reason to study B mesons is that they provide a window into new physics through the study of CP Violation. The combined symmetry of charge conjugation (C) and parity (P) takes a particle decay process into the corresponding antiparticle decay process. Naively, we expect that the decay rates of the particle and antiparticle decay processes should be the same. While this appears to be true for the strong and electromagnetic interactions, it is violated in certain weak-decay processes. The Standard Model incorporates CP violation through the CKM matrix, however, the amount inferred is many orders of magnitude too small to account for the baryon asymmetry of the Universe. Link

By studying CP Violation in B decays, it is hoped that we can see differences in decay rates between B and B mesons that cannot be accommodated by the Standard Model, thus providing evidence of New Physics (and hence new particle) in the decays of B mesons. However, many of the measurements one needs to make require one to measure the time of decay through the B mesons’ flight distance, e.g. time = distance / velocity. Since B mesons at CLEO were produced at rest, these measurements were not feasible. This was one of the key motivations behind the BaBar and Belle experiments, which used asymmetric e+ and e- energies. The asymmetric beam energy means that the Y(4S) resonance was no longer at rest and thus neither were the B and B mesons after the Y(4S) decayed. Link

CLEO was also able to perform many world-class measurements in the physics of charm hadrons and tau leptons. Eventually, the CLEO collaboration formed the CLEO-c collaboration, where we made groundbreaking measurements of the decays of D and Ds mesons. Link

To learn more about the CLEO experiment and its history, visit the CLASSE site here.