Looking back over my previous posts, I noticed that I forgot to describe the calorimeter and muon systems before jumping straight to the trigger. The subject of today’s post will thus be the calorimeters and my next post will probably be about the muon system.So what is a calorimeter? I vaguely remember that in high school chemistry, we performed a calorimetry experiment to measure the energy change in a chemical reaction by measuring the heat released (for those who are enjoy their etymology, calorimeter derives from the Latin word, calor, which means heat).

It is slightly different in particle physics, where the main function of the calorimeter detector subsystems is to measure the energy of produced particles. The materials and techniques vary, however the basic principle of all calorimeter systems is the same: to stop particles in the detector and measure how much energy is produced through interactions with the detector material.

On my very first post, I mentioned that LHCb contains two calorimeters; the electromagnetic calorimeter is responsible for measuring the energy of electrons and photons, while the hadron calorimeter samples the energy of protons, neutrons and other particles containing quarks. The calorimeters provide the main way of identifying particles that possess no electrical charge, such as photons and neutrons.

Both calorimeters have a sandwich-like structure, with alternating layers of metal and plastic plates. The metal plates are to stop particles, while the plastic plates are to measure the energy released. More technically, when particles hit the metal plates, they produce showers of secondary particles. These, in turn, excite molecules within the plastic plates, emitting ultraviolet light, which is then guided to photomultiplier detectors. The amount of light produced is proportional to the energy of the particles entering the calorimeter. 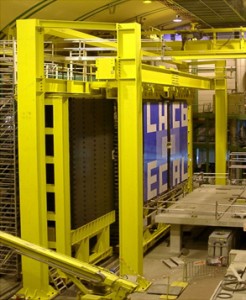 Above is a photo of the two calorimeters, the one labeled with LHCb ECAL is unsurprisingly the electromagnetic one, while the hadronic one is behind it. It is a little hard to get a sense of scale from the photo, but the electromagnetic calorimeter wall is approximately 6.3 metres by 7.8 metres and 0.5 metres thick, while the hadronic calorimeter wall is around 8.4 metres by 6.8 metres and 1.7 metres thick.

I think that’s all I have to say about the LHCb calorimeters, except to leave you all with this random fact. The specific design of the electromagnetic calorimeter, its alternate layers of scintillator and lead, readout by plastic fibres which run parallel to the plates, is called shashlik, which is also a type of shish kebab… mmm… 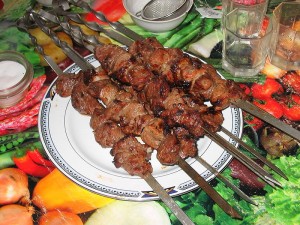