Located just outside of Geneva Switzerland, the European Organization for Nuclear Research, commonly known as CERN, is situated on the border between Switzerland and France. CERN has been involved in particle physics research for over half a century and is a unique example of the collaborative nature of science because the experiments being conducted there are overseen by nearly 6,500 scientists from 500 different universities spanning the globe.
This impressive international collaboration has led to increased knowledge about the elementary constituents of matter and radiation along with the interactions between them. Many such elementary particles do not normally occur in nature, but they can be created and detected during collisions of other particles, as is typically done in a particle accelerator. 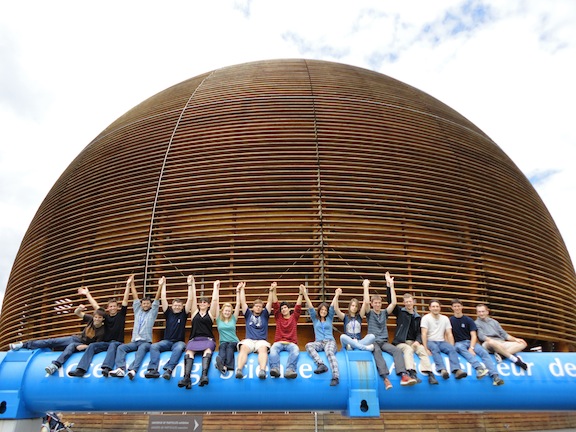 In circular particle accelerators such as those located at CERN, subatomic particles are sped along a circular track by electromagnets until they reach sufficiently high energy. The accelerated subatomic particles are then collided with targets. This interaction creates many other subatomic particles that then pass into detectors. From the information gathered in the detectors, physicists can determine the properties of particles and their interactions. The higher the energy of the accelerated particles, the more information that can be gathered as a result of a collision. Therefore, as you may well imagine, researchers involved in this type of high energy physics are constantly looking to develop larger, and thus faster, accelerators in order to probe deeper into the fundamental questions of their research.
As a result of such continual development in the field of particle physics, the Large Hadron Collider (LHC) – dubbed by some as “the accelerator of the future” – is currently running at CERN. The LHC is located approximately 100 meters underground and is 27 kilometers in circumference. The Experimental High Energy Physics Group at Syracuse University is part of the collaboration of scientists who will be conducting research at the LHC on four major experiments, each of which will look at particle collisions from a different point of view and with different technologies.